Climate Change is one of the biggest problems with far-reaching consequences faced by mankind. While the melting of glaciers and icebergs and submerging of coastal area are part of the common discourse, what isn’t often stated is its effect on agriculture. With a global population as per United Nations, expected to rise to 9.7 billion from the present 7.8 billion by the middle of the century, feeding the population would be a major task, especially with erratic and severe weather.  Several studies have pointed out the fact that the intensity of drought and their occurrences around the globe have increased over the past century. The poorer agricultural communities are worst affected by this problem as crop failure is being reported regularly.

The need of the hour thus is to develop crops that are drought tolerant and can offer higher yields even in adverse weather conditions. This is where Gene Editing can play a very important role in efficient plant breeding. While crop selection has been practised and perfected over centuries leading to more stable and stress-tolerant varieties of crops, CRISPR Gene Editing utilizes years of selective breeding and genetic information to efficiently bring tolerance traits into modern varieties of crops. This has already shown signs of success in having successfully modified crops to help them grow with less water and even in saline soil conditions.

A team of scientists at the Center for Plant Molecular Biology, University of Chile is evaluating how Gene Editing can help in modifying species of tomatoes and kiwis to increase their yield in dry and arid conditions. They are studying the traits of Poncho Negro, a variety of tomato native to Chile’s Azapa Valley, that is known for being tolerant to salinity and heavy metals. Researchers plan to improve the yield of Chile’s most widely grown tomato 7742 (seminis), under drought conditions.

Similarly, a recent study was conducted by the Department of Biosciences, University of Milan, Italy and the University of Montpellier, France to improve the yield of Africa’s Oryza glaberrima and Oryza sativa landraces. These native species are known for being resistant to drought, endemic pests and nutrient deficiencies but unlike their Asian counterparts are low yielding. The group of scientists in a paper published recently found encouraging pieces of evidence of how the native species can be modified for higher yields.

According to them by stacking multiple mutant combinations using CRISPR-Cas tools and dismissing the negative yield regulators can encourage favourable mutation. Gene editing tools can help in the faster adaptation of orphan and neglected crops and foster higher sustainable yields. The results of this study are encouraging given the prevalence of hunger and shortage of food in Sub-Saharan Africa.

There are similar studies going on using Gene Editing to improve the stress resilience of crops. While these may not reverse Climate change they would help in protecting food security for the poorer communities in decades to come.

Smart Harvesting – A must for better Crop Yield 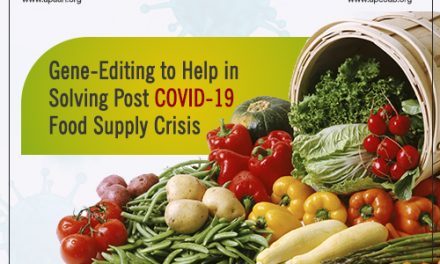 United States will not regulate most Gene Edited Crops