Story on Gender and agriculture: an unlikely couple married in Southeast Asia

Capacity building for integrating gender in research and development (R&D) on agricultural innovations often remains with organizing single gender training. Alternatively, it is often limited to hiring a gender specialist to allocate a small amount of her/his time to the project. This has proofed to be ineffective and a heavy burden for gender specialists. This success story presents an innovative approach to capacity development, which successfully changed agricultural researchers’ attitude to gender in Southeast Asia, with a specific focus in Vietnam. This new approach involved various stakeholders, such as male and female farmers in Vietnam, gender specialists from research organizations and NGOs, and agricultural researchers and policymakers from government organizations and universities in Cambodia, Lao People’s Democratic Republic (PDR), Myanmar, Philippines and Vietnam. 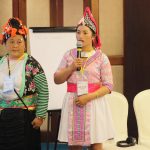 In Southeast Asia, gender roles in agriculture are rapidly changing along with male labour-migration and youth’s higher educational attainment. However, many agricultural interventions remain with employing gender-blinded approaches, which reflect men’s voices. As a result, women’s real needs, interests and capacities in agricultural innovation are not taken into account. Integrating gender in the design of agricultural research and related interventions is therefore essential to make agriculture more gender-responsive as a pre-condition for transformation of rural societies.

The first challenge in the attempt to integrate gender in agricultural innovation systems (AIS) was resistance from agricultural researchers, who felt very uncomfortable to talk about gender or denied gender inequality. Unlike the health or education sector, it was difficult for some people in the agricultural sector to understand the significance of addressing gender in bringing about successful agricultural innovations. The second challenge was that some agricultural researchers had simplified ideas, in which gender often meant ‘women’s participation’ in agricultural training programmes. This resulted in increasing women’s burden. It is because agricultural projects often invite women to training and teach them complicated and time-consuming tasks, such as pest management and post-harvest technology, without considering their time and labour burden. Women are already very busy with domestic work, and nowadays they have to attend training and work in agriculture. The projects often overlook women’s burden and justify that they addressed gender issues by increasing the numbers of women participants in their projects.

Women’s participation in agricultural training also often creates tensions between men and women. When a project invites only women to attend a training programme that will improve these women’s knowledge and capacity, their husbands feel jealous and in some cases they do not allow their wives to attend training. In some conservative communities, men are uncomfortable when outsiders bring the idea of gender equality or equity. If the training is about health or nutrition, husbands allow their wives to go. But if the training is about agriculture, men think that they should attend as household representatives. While NGOs can better handle those tensions, agricultural researchers normally do not care about those issues. It is very important to engage men as “gate keepers” and explain that training for women brings benefits to their families. Without such processes, tensions are created.

A small research activity, called “Integrating gender into agricultural research and value-chain” was funded by the Australian Center for International Agricultural Research (ACIAR) in July 2017. This 1.5-year project supported ACIAR’s ongoing agricultural projects in Vietnam and other Southeast Asian countries, aiming to build capacity of agricultural researchers to integrate gender in their studies and interventions.

The project was led by gender specialists from the International Potato Centre (CIP), Institute of Social Development Studies (ISDS), CARE International, and Oxfam Vietnam. Over the past 1.5 years, the team organized three gender trainings, five collaborative fieldwork studies to identify gender-based constraints and opportunities in agricultural innovation, eight gender and agriculture seminars in Vietnam, and one gender-awareness workshop in Myanmar. Some key gender-based constraints in agricultural innovation, particularly with respect to trying new agricultural practices or initiating agribusinesses by women, included: husband’s disapproval to invest in innovation, time constraints due to domestic work, and limited information, since usually it is men who are connected to information sources, such as input suppliers, government, and other innovative farmers, while women lack such linkages

“Today I had an opportunity to come to Hanoi for the first time…,” said a woman farmer participant. “I am very proud… We learned a lot from other participants, visited a supermarket and local markets,” she pointed out.

Fifty-eight people attended gender training programmes in Vietnam, and 43 people attended a gender-awareness workshop in Myanmar. Based on these capacity development events, four collaborative field studies were conducted in Vietnam in which farmers worked as co-researchers to identify gender-based constraints and challenges in agriculture. The key ones include: (i) language barriers between extension workers and women, since most women do not understand technical terms and/or cannot read text books; and (ii) women’s heavy dependence on their own manual labour (while men use some labour-saving machines), as a result of which women have limited time and are too tired to do more work.

“When the project team came to our village for the first time, they talked about gender, I liked it very much,” said a participating farmer. “Since then, I was really encouraged (to challenge and change gender norms)…” she added. 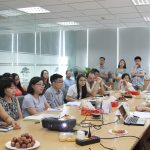 Monthly seminars on gender and agriculture were organized in Hanoi. Each time around 20-30 people participated. Source: Oxfam Vietnam

During monthly seminars, gender-integrated studies conducted in Southeast Asia were shared. The greatest outcome was that most agricultural researchers in ACIAR’s partner organizations understood the value of integrating gender in agricultural research and became strong gender supporters. This is an intangible asset from which gender-responsive agricultural technology innovation will be designed and implemented.

The issues of gender at the field level were revealed and discussed. Some key constraints included:

Action plans were then developed and implemented by using participatory gender tools for listening to women’s and men’s voices in the field sites. Tools and approaches were widely shared through the project website.

At the two-day Southeast Asia regional gender workshop of ACIAR, participants shared their experiences of integrating gender into their agricultural projects with policymakers at the Ministry level in Vietnam and Myanmar, agricultural researchers from the five Southeast Asian countries, and Vietnamese ethnic minority farmers. Some participants developed their action plans integrating gender in their research, such as conducting case studies on gender and policy analysis, as well as organizing gender trainings.

The key to successful implementation of this innovative capacity-development approach lies in many opportunities for interaction between gender specialists and agricultural researchers, and continuous support from the gender specialist team (that consists of NGOs and research organizations). This approach has proofed much more effective than a gender specialist working individually.

The project acted as a knowledge hub to share real experiences and tools in integrating gender to AIS. The indirect broader impacts include influencing policy makers at the Ministry levels in Myanmar and Vietnam, as they were actively involved in the policy session of the regional workshop. At the field level, five projects implemented gender-responsive interventions or research. Among those, ten farmers were invited to the regional workshop where they presented their views on gender and agriculture. The voices of female farmers inspired many agricultural researchers.

“We found that not much agricultural produce from our region is being sold in Hanoi,” the woman farmer participant said. “We would like to improve the quality and sell our agricultural produce in the Hanoi market. Before coming to this workshop, we had no idea about this possibility, but now we think we can do it,” she stressed.

This innovative capacity-building approach requires a significant amount of time for building trust among different stakeholders with various backgrounds. For example, trust needs to be built between gender specialists and biophysical scientists, between qualitative researchers and quantitative researchers, and between NGO workers and researchers. Like the process in which a couple gets married, it took some time to get to know each other and build trust in relationships of gender specialists and agricultural researchers. To scale up this success, there is a need to have a good facilitation team and donors that can be patient and understand the long-term value of this innovation, whose impacts cannot be measured in a short time.

Guide for facilitators to explore gender-based opportunities and constraints in agriculture: https://genderinagr.files.wordpress.com/2018/04/facilitation-tools_icraf-gender-sra-eng_final.pdf

Vacancy on CSA Country Profile for The Kingdom of Thailand – Consultancy, CIAT 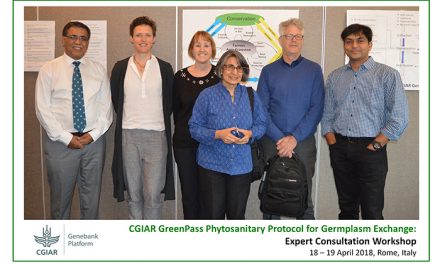