Though Odisha is India’s top sweetpotato-producing state, most farmers grow low-yielding varieties of limited nutritional value. The Odisha Directorate of Horticulture and the International Potato Center (CIP) spent four years promoting improved varieties and good agricultural practices in four districts of Odisha, resulting in a 25 per cent growth in the area dedicated to the crop, a 17 per cent increase in farm productivity, and a 40 per cent increase in farmer incomes within the project areas; as well as the introduction of a nutritious, orange-fleshed sweetpotato variety. The project directly and indirectly benefited approximately 6,000 people, and developed a scalable approach that combines farmer capacity development with demand creation, which has potential for reducing hunger, malnutrition and poverty while boosting farmers’ resilience. 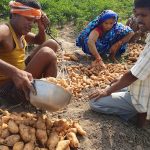 By the end of 2017, farm productivity among participating farmers had increased by 17%

Sweetpotato has great potential for improving the incomes, diets and resilience of smallholder families in Odisha – the state that produces more of that root crop than any other in India, but in which most farmers grow low-yielding varieties with few inputs. The International Potato Center (CIP) and the Odisha Directorate of Horticulture spent four years promoting sweetpotato and improving production in four districts of Odisha, and the results bode well for scaling the approach across the state.

“Sweetpotato was once considered a poor man’s crop here, but now it is considered a rich man’s crop,” said Dr Sreekanth Attaluri, a project manager with CIP. Perceptions of sweetpotato in India began changing when government officials grew aware of its climate resilience. In 2013, Cyclone Phailin battered India’s eastern coast, destroying much of Odisha’s crops and raising the spectre of hunger. However, most sweetpotato fields survived, so farmers dug up those roots in the days following the storm, saving tens of thousands from hunger.

Indian officials decided to promote sweetpotato cultivation in Odisha and the Government of India signed an agreement with CIP in 2013 to lead a four-year project called Generating Advances in Incomes and Nutrition through Sweetpotato (GAINS). Funded by India’s Ministry of Agriculture and Farmers’ Welfare, and managed by the Government of Odisha, the project partnered with CIP and the Odisha Directorate of Horticulture, with participation of the Indian Council of Agricultural Research (ICAR). Together, they launched an integrated intervention to help farmers produce more sweetpotatoes while promoting the crop’s consumption among the general population in four Odisha districts: Ganjam, Dhenkanal, Koraput and Sundargarh.

Capacity development played a central role in the project, which provided training for more than 2,000 farmers and government technicians between 2013 and 2017. This included workshops and group visits to agricultural universities, farms and processing plants, but most of the learning was through field training in the communities.

To raise interest in the crop and inspire farmers to grow it, Attaluri and his colleagues also organized “street theatre” presentations of religious stories that included references to sweetpotato. “Sweetpotato has a lot of significance in the Hindu religion, especially in Odisha” said Attaluri, who explained that it is mentioned in religious texts and is traditionally eaten during pilgrimages. He added that, in addition to the theatrical presentation, the project produced posters, training manuals and murals.

An early priority was to expand the production and distribution of quality planting material for improved sweetpotato varieties, primarily high-yielding Kanjangad and nutritious, orange-fleshed Bidhan Jyoti. Orange-fleshed sweetpotatoes are rich in beta-carotene, which the body converts to vitamin A, so feeding them to children can reduce the risk of childhood blindness and other ailments caused by vitamin A deficiency.

Demonstration blocks were set up in communities where training in vine multiplication and good agricultural practices was offered. Training was tailored to the knowledge and needs of farmers in different areas, since commercial production is more common in Ganjam and Dhenkanal districts, whereas the hilly Koraput and Sundargarh districts are predominantly home to tribes that mainly grow sweetpotato for local consumption.

While the principal focus of training was agronomic, farmers also gained soft skills such as strategies for getting better market prices. They learned to grade their sweetpotatoes to sell them for different prices, negotiate with middlemen, and combine their harvests and hire trucks to avoid middlemen altogether.

Attaluri lamented that it was challenging to get women to attend trainings – they represented just 15-30 per cent of participants, depending on the community. This was despite the fact that the project encouraged women to come and bring their children. Most women participants owned or leased farmland. To ensure that all participants benefitted from capacity development, training session attendance was made a prerequisite for receiving fertilizer and other project subsidies.

Most field trainings took place during the planting season, when subjects covered included fertilizer application, pest control and other agronomic practices, or during the harvest season, when the focus was on postharvest options. CIP also facilitated value chain development that included sweetpotato’s introduction into school lunch programmes and a mobile kitchen in which chefs demonstrated recipes for incorporating sweetpotato into popular Indian dishes, to catalyse greater demand for the crop.

CIP also introduced processing equipment and facilitated the formation of community groups to produce sweetpotato chips or puree, which can be substituted for some of the flour in baked goods. Attaluri noted that those groups were dominated by younger farmers. “The youth want to try something new. They want to connect with new markets,” he said.

The combination of improved varieties, agronomic training, value-added options and efforts to raise consumer awareness of sweetpotato’s culinary and nutritional attributes reaped positive results for approximately 6,000 farmers who benefited directly or indirectly from project activities. By the project’s completion in late 2017, the area dedicated to sweetpotato had grown by 25 per cent, farmer productivity had increased by 17 per cent, and farmers’ incomes had improved by 40 per cent.

As a testament to the project’s success, the Government of India approved a second phase of GAINS in 2018. That phase will replicate Phase I’s actions in four additional districts, while placing greater emphasis on women’s participation, nutrition education and the cultivation of the orange-fleshed Bidhan Jyoti variety, in an effort to reduce the incidence of vitamin A deficiency. Though GAINS I was only active in four of Odisha’s 30 districts, it established a scalable approach that can be used to advance progress toward SDGs 1, 2 and 3 in the rest of the state while increasing farmer resilience under climate change. 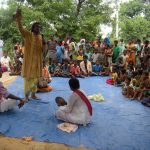 Because sweetpotato farmers plant vines rather than seeds, it is important that efforts to promote the crop begin with the establishment of vine production capacity. At one point in the project, demand for sweetpotato planting material exceeded the supply.

Mechanization of the planting process can decrease production costs on larger farms, because the tasks of moving soil into ridges and cutting vines into pieces, are labour intensive, and farm labour is expensive at the start of the monsoon. CIP thus recommended that farmers rent tractors and contracted the development of a vine-cutting machine to reduce farmer costs. 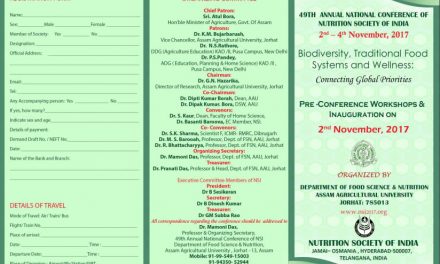