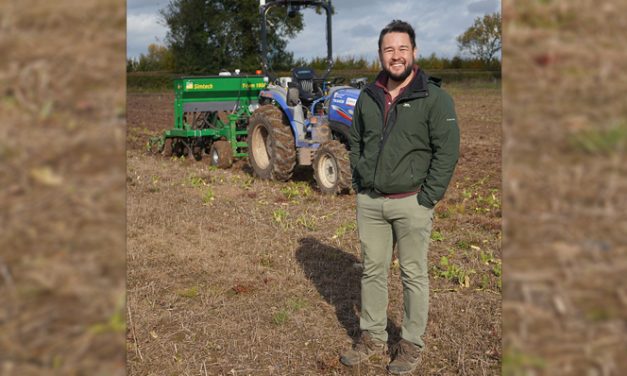 With the global population expected to rise to 10 billion in the next 30 years, the UN predicts that food production will need to double by 2050.  How can this be done in an environmentally sustainable way, given the threat that climate change poses to our land and to food production? How can we avoid a catastrophic food disaster that could leave millions starving?

The issue was brought into sharp focus in 2020 when travel restrictions and the dearth of labour, caused by COVID-19, led to the shortage of some food stuffs across the world. Suddenly, we were all forced to sit up and take notice of where our food comes from and how it is produced. It was a timely warning of the dangers of the food insecurity crisis we are all threatened with.

In a new eight-part multi-platform series called Follow the Food, sponsored by Corteva Agriscience BBC World News explore the stories behind feeding the world’s ever-growing population. Presented by British Botanist and science writer James Wong, the series examine how farming, science, AI technology and the consumer can overcome this profound challenge, and asks whether we can do so in a way that doesn’t harm the planet.

The series were launched in January 2020 with a fascinating look at the way food production causes an acceleration in climate change and how sustainable production methods can reverse it. The programme takes a deep dive into the exciting and innovative ways that the global farming industry is adapting to combat climate change and I think there are some stories your audience would be really interested in – from seaweed farms emitting fewer greenhouse gases to precision agriculture enabling farmers to reduce their use of water, pesticides and chemicals in particular the use of silica nanoparticles.

James Wong shares his insights with APAARI on the importance of innovation in agriculture, and what this means for our diets in the future.

What are global agencies, such as FAO, doing to boost the much needed innovations in agriculture?

From supporting the conservation and wider adoption of under-utilised crop species, to empowering women and their role in agriculture, the FAO are doing a huge range of really important work to help support these much-needed innovations.

What are the innovative approaches for attaining and sustaining food and nutrition security globally?

James: In Follow the Food, we explore a huge range of innovative approaches for attaining and sustaining food and nutrition security around the world – from diversifying our diets to vertical farming, revitalising degraded land to encouraging a new generation of farmers into the industry. For example, in episode four, which airs on BBC World News on 20 and 21 February, we look at how drip-irrigating rice in India slashes water consumption and methane emissions in one go.

India is now one of the most water-stressed countries in the world, with almost 50 per cent of the country facing drought-like situations. Worse still, 70 per cent of India’s aquifers are dry. But finding a solution is an entirely female-led pioneering system called Bhungroo. They use a pump-like technology, which injects rainwater underground during monsoons. This helps keep land from waterlogging and recharges the ground aquifers. The stored water can then be used in farming or for other purposes during the dry season.

How can smallholder farmers of Asia and Africa cope up with modern technological innovations, such as Precision Farming and Artificial intelligence?

James: I think the most important thing to bear in mind is that game-changing technological innovations don’t always have to be of huge scale or out of reach of small-scale farmers. In fact, many are surprisingly democratic and ingeniously straightforward. As a small example, when I went to Harpers Adams University to investigate cutting-edge, AI driven farming machinery, I was expecting to see something straight out of a science fiction film. However, what I saw was a 30-year old, small-scale tractor that was hitched up to an iPad with really straightforward pieces of hardware. Essentially, not that much different to an old school sat nav, but could radically transform farmers’ lives. Something that genuinely astounded me.

However, to even access some straightforward tech, there have to be social and political changes that allow equal access to them. This is a theme we also address in episode three of Follow the Food, looking at the empowerment of women coffee farmers in Kenya and a generation of new farmers from immigrant backgrounds in the United States, for example.

How can agriculture be made more lucrative and glamorous to avoid migration of farmers to urban areas in the developing countries?

James: Follow the Food has a whole episode dedicated to how we are going to grow the next generation of farmers, interviewing the likes of food systems pioneer, Kimbal Musk (Elon Musk’s brother), to robotics students, who are revolutionising agricultural tech.

I think a central theme that kept coming up when making Follow the Food was the misconception that working in agriculture is a low skill, low paid profession, which can exclude many of our best and brightest minds from considering a career in the industry. The crossover between different professions – robotics, tech, ecology, marine biology – seem to be the segue route to encouraging a new generation of incredible talent into agriculture.

How can we sustain the increase in agricultural production by ensuring environmental protection?

James: These are often seen as conflicting pursuits, but the whole history of agriculture has also been the history of intensification; giving us higher yield with fewer inputs. This, counter to popular belief, means that our per capita contribution to planetary impact is actually lower than at any other time in our past, there are just so many more of us.

According to the UN, food production will need to double by 2050, to feed our growing population, so there is a real and urgent need to further intensify agriculture but with even lower inputs of land, water, fuel and agrochemicals.

What I found really inspirational about the stories in Follow the Food are the ingenious and, sometimes incredibly simple, ways in which we are already able to do this, including by slashing food waste, which is one of the most overlooked issues that faces humanity.

Learning a lesson from COVID-19 pandemic, what needs to be done to avoid disruptions in any global supply chain of agricultural goods?

James: I think one of the clearest things is the need for international co-operation – the need to streamline food distribution chains and build in resilience. If you look at the success stories behind food chains that proved resilient during the pandemic, one of the things that is really clear is how a mixture of approaches to mitigate risk is essential.

When it comes to food, we can often have quite a polarised, almost tribal approach to a perceived ‘ideal’. Either local, small-scale and short chains, or global, mass scale and complex are pitted against each other as mutually-exclusive solutions. However, in reality what we saw is that a mixture of both these approaches was essential.

How can we avoid key agricultural biosecurity threats? Should we not be proactive and take prophylactic measures than lamenting and taken curative measures?

James: Over millennia of agricultural practice, we’ve selectively bred a relatively small handful of robust nutritious plants to crop. More than half the calories that all of human civilisation is based upon come from the seeds of just three grass species – wheat, rice and corn. Whilst modern agriculture has given us the most affordable and the most plentiful food supply in the history of our species, relying on that small selection of crops we’ve been cultivating is a perilous foundation for all of humankind.

In episode two of Follow the Food, we look at this specific issue and investigate how it affects the fourth most important crop in the world – bananas. Kenya grows around 1.5 million tonnes of bananas annually, and it’s a key local food source. But the Cavendish variety, which makes up almost half of all the bananas grown on the planet, is susceptible to Panama disease and is at imminent risk of extinction. We visit a research centre in Kenya, as they’ve been studying alternative banana varieties, in the hope they can be as popular as the Cavendish, but much more resilient to disease.

What should be done in terms of knowledge management to ensure that one and all in the civil society understands the importance of sustainable agricultural development?

James: Oh that’s a really good question! For me, that’s one of the key reasons I worked on Follow the Food. In a time where public opinion on subjects as crucial as food and farming are increasingly polarised and coloured by a wealth of disinformation, it is even more vital for people to have access to an information source that explores these issues in an objective, clear and impartial way. That is exactly what we set out to do in Follow the Food – report on a diverse range of options from around the world, explaining these to an international audience, and inviting them to make up their own mind on these issues.

APAARI appreciates the time of James Wong to address these important questions and invites all APAARI Community to watch Follow the Food series to learn more about these topics highlighted in this article.

Follow the Food is airing at 0130 and 1530 GMT on Saturdays and 0930 and 2030 GMT on Sundays on BBC World News for eight weeks from 28 January 2021. Audiences can also visit www.bbc.com/followthefood for special features, and @BBCFuture for the latest from the series.